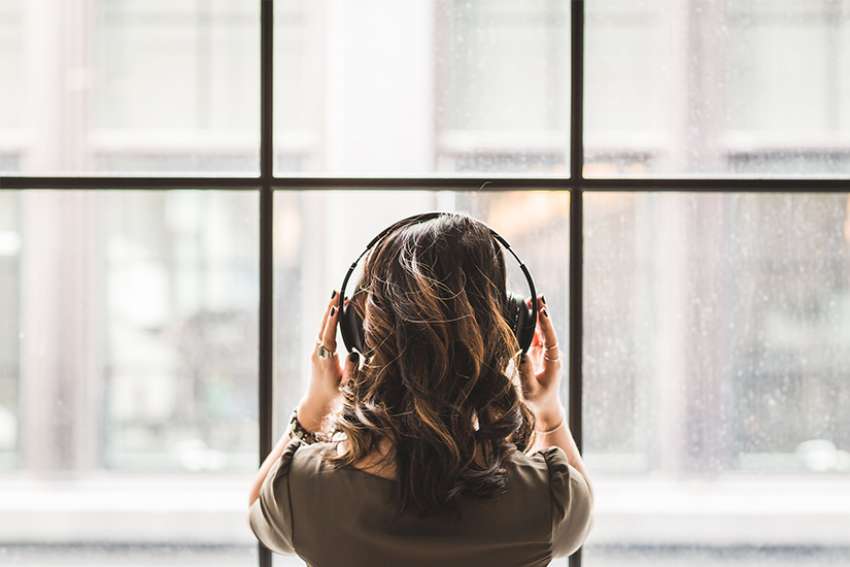 Written by Vanessa Santilli-Raimondo for The Catholic Register on September 24, 2018

I officially jumped on the audiobook bandwagon about a year ago.

I tried reading e-books, with no success. The digital pages always felt cold and uninviting, lacking the sensory experience that comes from the feel of holding a traditional book in your hands.

But I’ve had a much different experience with audiobooks. Quite an opposite one, in fact. Audiobooks are a total feast for the senses as an engaging narrator — sometimes a well-known actor — brings stories to life through the performance of different voices, dramatic pauses and the like.

My first audiobook was A Study in Scarlet by Sir Arthur Conan Doyle, read by popular British narrator David Timson, a seasoned narrator who has made 1,000-plus broadcasts for BBC Radio Drama.

I dove into this new literary format on the subway in an effort to make my commute more enjoyable. It worked, and I now let narration carry me home.

I’m not alone. Audiobooks are having a moment. According to a study by BookNet Canada on the state of digital publishing, 61 per cent of Canadian publishers now produce digital audiobooks, up from 37 per cent in 2016. It’s not surprising. They’re a convenient way to fit books into a busy lifestyle — especially for this bibliophile. From topics such as spirituality and sports to health and fiction, there’s something for everyone.

For those so inclined, they can even listen to the Bible as an audiobook, as well as a wide range of audiobooks from Catholic writers such as G.K. Chesterton and Henri Nouwen.

Reflecting on the increasing popularity of audiobooks brings to mind the words of famous Catholic media theorist and public intellectual Marshall McLuhan, who coined the phrase “the medium is the message.”

In McLuhan’s Understanding Media, published in 1964, he explained: “The medium is the message. This is merely to say that the personal and social consequences of any medium … result from the new scale that is introduced into our affairs by each extension of ourselves, or by any new technology.”

So, how does the shift to an audio medium impact our lives? Audiobooks allow us to maintain a reading hobby at times when reading a traditional book would be difficult to manoeuvre. For example, on a crowded subway train where there is standing room only, or while exercising, or doing chores around the house.

My go-to app for audiobooks is Libby, by Overdrive, a service created by libraries. By downloading a free app, your library card becomes your ticket to access thousands of audiobooks, e-books and magazines that are literally at your fingertips.

Interestingly enough, humans may be genetically hardwired to listen as opposed to read. Oral storytelling was well established long before the marvel of written words. According to neuroscientist V.S. Ramachandran, as quoted in a piece in The New Yorker: “Language comprehension and production evolved in connection with hearing probably 150,000 years ago and to some extent is ‘hardwired’; whereas writing is 5,000 to 7,000 years old…. So it’s possible listening to speech is more spontaneously comprehensible and linked to emotional brain centres — hence more evocative and natural.”

We’re living through a moment in time in which too many of us spend endless hours consuming snippets of information on social media — fragmented and not necessarily composed by credible sources. Our moments “in between” are swallowed up by a seemingly endless cycle of scrolling through a barrage of viewpoints without disclaimers, context or, in most cases, substance. It’s to our detriment, as countless studies suggest that this information overload is slowly eroding our attention spans.

The consumption of any and all forms of books — whether they be print or digital — is much needed. But audiobooks have a certain charm about them. Being read to evokes warm feelings of childhood when story time was a listening time. Audio books are another way to remind us of the power of storytelling, and why we fell in love with books in the first place.

They remind us, too, of the importance of finding time to sit down and savour that irreplaceable feeling of enjoying a good book — in whatever form it comes.

END_OF_DOCUMENT_TOKEN_TO_BE_REPLACED

"#ReturnToHogwarts is giving me all the feels. Flashing back to nerding out at the Warner Bros. Studio Tour in Londo… https://t.co/jOpLaWDeHS"
142 days ago
"RT @TheBeaverton: Childhood home sold to lovely young numbered holding company https://t.co/zt8jrI6cgj https://t.co/3f7COkNOj7"
172 days ago
"RT @archtoronto: New on our blog: The Illuminating Story of the Advent Wreath https://t.co/Bqv8weJJrv #catholicTO https://t.co/BdyDh0Rmyb"
176 days ago
"RT @Sunnybrook: Age 12+ and live, work or go to school in a Toronto (M) postal code? Book an appointment for your first or second dose of t…"
332 days ago