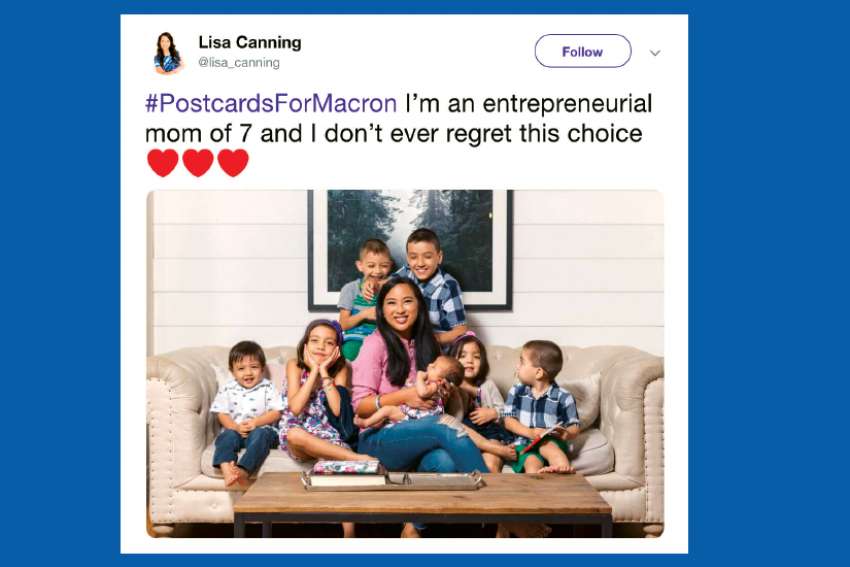 Written by Vanessa Santilli-Raimondo for The Catholic Register on November 8, 2018

During a recent speech, French President Emmanuel Macron made a statement that hit a nerve with moms around the world.

Speaking at an event organized by the Bill and Melinda Gates Foundation, Macron wanted to make the point that parenthood should be a choice.

“One of the critical issues we have regarding the African demography is the fact that this is not a chosen fertility,” he said. “Present me the lady who decided, being perfectly educated, to have seven, eight or nine children.”

In response, about 20,000 perfectly educated moms — largely from the United States and France — mobilized on Twitter. They used the hashtag #PostcardsForMacron to post photos of the large families they chose to have, along with details of their educational backgrounds. The hashtag started with Catherine R. Pakaluk, a professor of social research and economics at the Catholic University of America, who shared a photo of herself and six of her eight children. Accompanying the snapshot, she wrote: “PhD Harvard (2010), AM Harvard (2002), BA UPenn (1998). Eight children by choice. Keep it going ladies, add your own.”

As I watched post after post flood social media, it was clear that these bold women who opted to have large families should be celebrated — not judged — for committing to family life. Motherhood, after all, is the very definition of selflessness.

Pakaluk has a vested interest in this subject. Catholic News Agency reported that her academic research area focuses in part on the effects of fertility on economic development. And while she acknowledged that Macron’s words may have been taken out of context — he was referring to women in the developing world, not the United States or Western Europe — she said his comments “represent an underlying view common in contemporary culture,” namely that no intelligent woman would want to have a large family.

Perhaps Macron had no intention of belittling the many women who make the choice to have large families, but he unwittingly highlighted the issue of how these women have been judged by society. His statement was simply a tipping point.

No doubt, having a large family is countercultural in the 21st century. As of 2016, the fertility rate in Canada had dropped to 1.54 children per woman. There are a multitude of reasons for this trend. One of them is that Canadian women spend more time pursuing higher education and wait to get married until they feel established in their careers — that is, if they’ve found a mate by that time. From there, it can be a race against the biological clock to have one or two kids — let alone seven or more.

One Canadian mom who defies the status quo is Lisa Canning, a Toronto mother of seven children under the age of nine. Canning wears many hats as an expert in parenting, interior design and lifestyle. She posted using the #PostcardsForMacron hashtag, saying: “I run a business with my seven kids in tow so I’d like to say to Monsieur Macron that it’s very possible to have a large family and be an educated woman. I think people don’t realize the incredible work that goes into mothering and the incredible fulfillment that can come from motherhood.”

When Canning got married in 2007, she says she was terrified of having one child, let alone seven. But she and her husband used the skill of discernment carefully — taking it “one glorious babe at a time.” She describes her family life as “full of joy,” and relies on the emotional, spiritual and physical support of family, friends and other caregivers as she and her husband navigate the ups and downs of life.

Has she ever felt judged by society for having a large family? You bet.

“When I was a younger mom, I felt judged for being open to a large family,” she said. “I would take comments about my lifestyle quite personally, and often the comments of others would weigh heavily upon my confidence level.

“But now with more experience, not only in parenting children, but confidence in feeling comfortable in the person I have become, the comments don’t bother me as much. I think the more confidence we have that we are walking the path that God has intended for us, negative comments get easier to put aside.”

It may not be the path for everyone, but for those who follow a vocation of exponential motherhood, I say kudos. Mothers, after all, have enough to worry about without having to answer to the President of France.