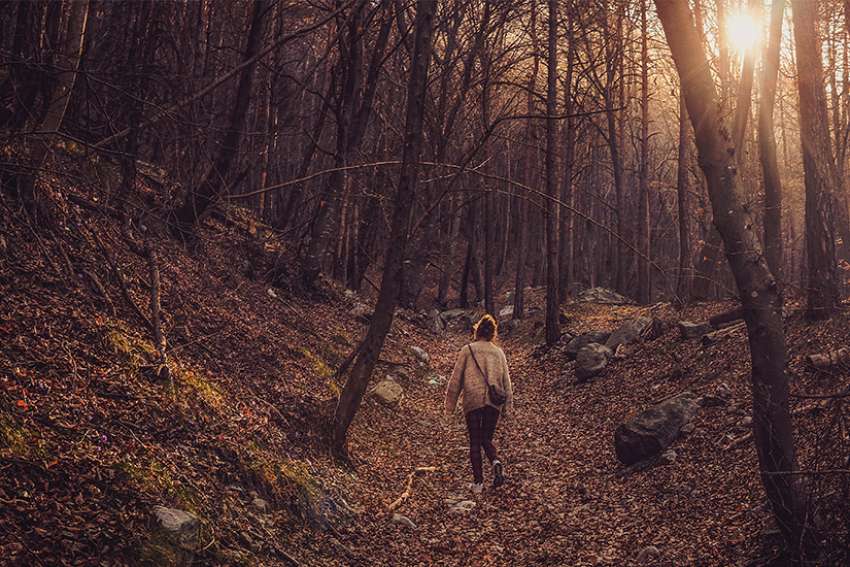 Written by Vanessa Santilli-Raimondo for The Catholic Register on December 17, 2018

Should doctors start prescribing a leisurely walk in the forest to improve health and well-being? According to researchers from Japan, the answer is a resounding yes.

Forest bathing, which originated in Japan in the 1980s, is the practice of “bathing in the forest atmosphere” or “taking in the forest through your senses.” The term comes from the Japanese shinrin-yoku — shinrin means “forest” and yoku translates to “bath.”

There’s no actual water — or traditional bathing — involved. The focus is on being present in nature in order to reap a variety of health benefits linked to silent contemplation amongst the trees. Whether breathing in the scent of fresh pine or admiring the beauty of rows of Douglas firs that seem to tower straight up into the clouds, researchers say the benefits include reductions in stress and blood pressure, stronger immune and cardiovascular systems, increased energy and improved mood and concentration.

On a recent visit to Iceland I was struck by the absence of trees amidst a terrain of lava fields, fjords, glaciers and hot springs. In stark contrast with Canada’s lush landscape, the “land of ice and fire” is dotted sporadically with trees. Why? One explanation is that after Vikings discovered Iceland some 1,100 years ago, settlers axed most of the trees for firewood and to build homes and boats — and growing back the lush forests of long ago has been a slow process.

In Canada, home to nine per cent of the world’s forests, the concept of forest bathing is gaining popularity. In September, Markham became the first city in the country to create a designated forest therapy trail that, in part, can be led by a guide from the Global Institute of Forest Therapy, a non-profit that promotes using nature to build mindfulness.

For Catholics, escaping into nature for short periods of time is often an important component of taking a retreat, where peace and quiet allow us to discern more effectively. When I visited Villa Maria Guadalupe, the retreat centre run by the Sisters of Life in Stamford, Conn., one of the most effective aspects of the retreat was wandering the grounds amidst the trees as I contemplated an upcoming life transition.

Spirituality and nature go together, as does the resulting sense of inspiration and renewal. In the Catholic tradition, trees signify the cyclical nature of creation — new life, but also death, as the cross on which Jesus was crucified came from a tree.

When he was a young priest, St. Pope John Paul II often led groups of young people into the forests of Poland to help them feel closer to God through nature.

“Our very contact with nature has a deep restorative power; contemplation of its magnificence imparts peace and serenity,” he once said.

Historically, hermits who desired prayerful lives of seclusion would retreat to the forests. For me, this brings to mind St. Giles from Greece, well-known as Giles the Hermit, who spent many years living deep in a forest “engaged in the contemplation of heavenly things.”

While Pope Francis doesn’t mention forest bathing in Laudato Si’, he writes that St. Francis of Assisi asked that part of the friary garden always be left untouched, “so that wild flowers and herbs could grow there, and those who saw them could raise their minds to God, the Creator of such beauty.”

Scientific researchers are proving the health benefits from spending time in nature, but the realization that nature is a beautiful gift from God should be enough to fill us with immense gratitude, a feeling linked inextricably with elevated levels of happiness. That spending time in nature makes us feel good is no surprise. For science to now assert the positive impact this has on our health is a bonus and should keep us going back for more. As Canadians, we’re surrounded by trees and should take advantage of the many accessible forests, parks and ravines.

Mother Teresa once said: “We need to find God, and He cannot be found in noise and restlessness. God is the friend of silence. See how nature — trees, grass — grows in silence; see the stars, the moon and the sun, how they move in silence…. We need silence to be able to touch souls.”

As the darkness of winter descends, we should consider forest bathing as a way to optimize the fleeting hours of sunshine. With a good pair of boots, I know I will.