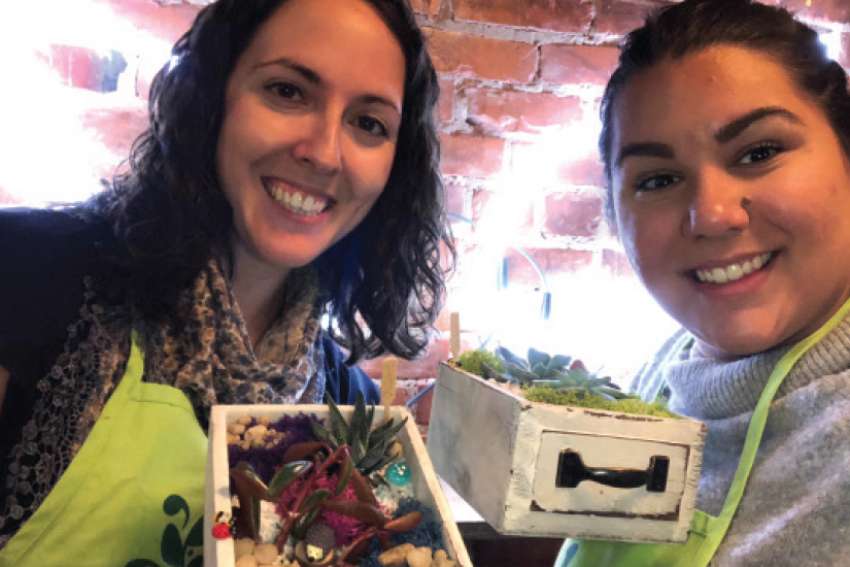 Written by Vanessa Santilli-Raimondo for The Catholic Register on October 15, 2018

As celebrations for the Season of Creation unfolded over the past month, I was struck by two vastly different experiences: one life-giving, the other literally toxic.

The annual Season of Creation, launched in 1989 by the Eastern Orthodox Church and endorsed by Pope Francis in 2015, calls on Christians worldwide to pray and take action to help care for the gift of creation. It wrapped up on Oct. 4, the feast of St. Francis of Assisi, the patron saint of ecology.

Embracing the spirit of the month, I joined a friend at a do-it-yourself evening called Plant Nite, where people gather to create tabletop mini-gardens. Our materials included a vintage-looking wooden drawer and a variety of exotic-looking succulents, decorative rocks and stones, colourful reindeer moss and a tiny hedgehog to sit atop a piece of bark to give the display a woodland feel.

The instructor, or master gardener, led the groups of millennials through our steps. We started off by lining the bottom of the drawer with small rocks for drainage and then adding a type of cactus soil that provides the dry conditions these plants require. Then we planted our succulents and arranged the moss to create a mini-garden which, although no Eden, was nonetheless a proud creation. We left feeling refreshed and renewed, and somehow closer to nature after an evening of casual conversation and exercising our green thumbs.

At complete odds with this creative experience was a situation I had been trying to resolve in the previous days. I had purchased a couple of yoga mats for pilates and general exercise.  I was left breathless by what came next — and not in a good way. Removing the mats from the package, I was overwhelmed by the smell.

To rid my living room of the strong odour from the synthetic material, I busted out a home-made, essential-oil and sprayed this lemon blend directly on the mats. It was to no avail. They mats still reeked, so I left them on my balcony overnight hoping to remove the stench. Nothing.

It was an unnatural stench, which I thought can’t be good for human health. I was right.

I was disheartened to discover that plastic mats like these often are made from polyvinyl chloride, commonly known as PVC — widely considered to be the most toxic consumer plastic on the market. I also learned that this type of plastic is softened with phthalates, a group of carcinogenic chemicals linked to reproductive abnormalities and infertility, according to Environmental Defence Canada. The Canadian Cancer Society’s website indicates that phthalates aren’t chemically attached to the plastic products that contain them, which means they can leach into the air we breathe.

It’s shocking that this toxin is in products being sold to unsuspecting consumers. It’s a particularly hard bitter pill to swallow when these chemicals are found in products intended to improve health. This material also harms the environment. You can’t recycle it and disposing of it by incineration releases the cancer-causing chemical dioxin.

Six days later, the mats still stunk, so I returned them.

It’s not just some types of workout mats that contain phthalates. The chemical is found in an array of products, including shower curtains,  toys, clothing, paint, cosmetics, bedding and food packaging.

According to Health Canada, current evidence indicates the level of phthalates most Canadians encounter is not harmful. This opinion is not shared by Environmental Defence, a Canadian advocacy group which claims we’ll pay a health and environmental cost by failing to ban phthalates. Via email, I was told, “Health Canada continues to review the scientific literature on phthalates and monitors the actions of its international regulatory partners.”

We often place trust in brands we know well, but this isn’t enough to ensure products are free of toxic materials. The lesson here is that it’s up to us to become smart shoppers. I’ve learned, for example, there are PVC-free mats out there, but it takes extra leg work to find them.

The month-long Season of Creation may be over, but my appreciation and enjoyment of the natural world didn’t end with it. I have resolved to be more aware of how the products I use daily impact my health, the health of loved ones and the long-term health of the planet.

As Pope Francis writes in Laudato Si’, “There is a nobility in the duty to care for creation through little daily actions…. We must not think that these efforts are not going to change the world. They benefit society, often unbeknown to us, for they call forth a goodness which, albeit unseen, inevitably tends to spread.”

We all are called to be responsible stewards of God’s creation.