Written by Vanessa Santilli in CPA Magazine on Sept. 1

Rita Elias was at a networking event when inspiration struck. “I was wearing a fur vest that [my sister and I] had redesigned for my mom and everybody was asking where I got it,”says Elias, a former financial analyst at L’Oréal Canada. 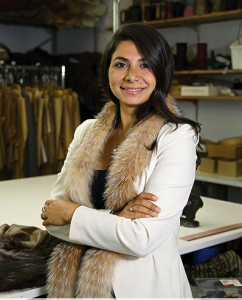 In October 2014, Montreal-based sisters Rita and Rim took the plunge and launched Eläma — which translates as “the good life”in Finnish — a fur fashion brand made exclusively in Canada and specializing in vests.

Since then, the sisterly duo has faced the dragons on CBC’s Dragons’ Den (scheduled to air this fall); hosted pop-up shops (which take place in short-term rental spaces), including one at a high-end boutique during the Grand Prix in June; and showcased a collection at StyleLab Montreal, a relatively new trade show created by the Fur Council of Canada. In addition, Rim participated in a trade mission in Paris with the Centre de commerce mondial de Montréal (World Trade Centre Montreal), where Montreal-based companies presented their collections to French partners.

“It’s been really encouraging, so we know we’re on the right path,”Elias says of the feedback.

Their objective? To make fur more accessible, says Elias. “It’s no longer just your mom’s long mink coat — it could be a vest, it could be an accessory. And now we’re mixing and matching a lot of things with cashmere, suede and leather.”

Her career credentials have helped tremendously; with her background in accounting, Elias has taken on a managerial role in the company.

“We do a lot of return on investment. Because we’re very small and [mostly] funded with our own money, we have to be strategic about where we spend our money. I do my own financial statements and reports and I crunch the numbers.”

For a year and a half, her lifestyle was busy as she balanced a demanding full-time job with developing Eläma after hours. To make things work, she had to be very disciplined. “It wasn’t always easy so [I had] to choose where to spend [my] time.”

Having recently left L’Oréal to focus on the budding company full time, she says the best part is being able to work with her sister, her best friend. The freedom to bring their vision to life has also been extremely rewarding, she adds.

“The stars were aligned and guided us to this, so we’re super happy.”