Written by Vanessa in The Medical Post on May 26

Doctors working in the Canadian penal system must be able to treat a wide range of physical and mental health emergencies. “The scope of pathologies you encounter daily varies from the treatment of a plantar wart to providing palliative care to a patient with terminal-phase cancer,” said Dr. David Lesage, who is employed full-time with Correctional Service Canada at both the medium security Cowansville Institution and the maximum security Donnacona Institution in Quebec. 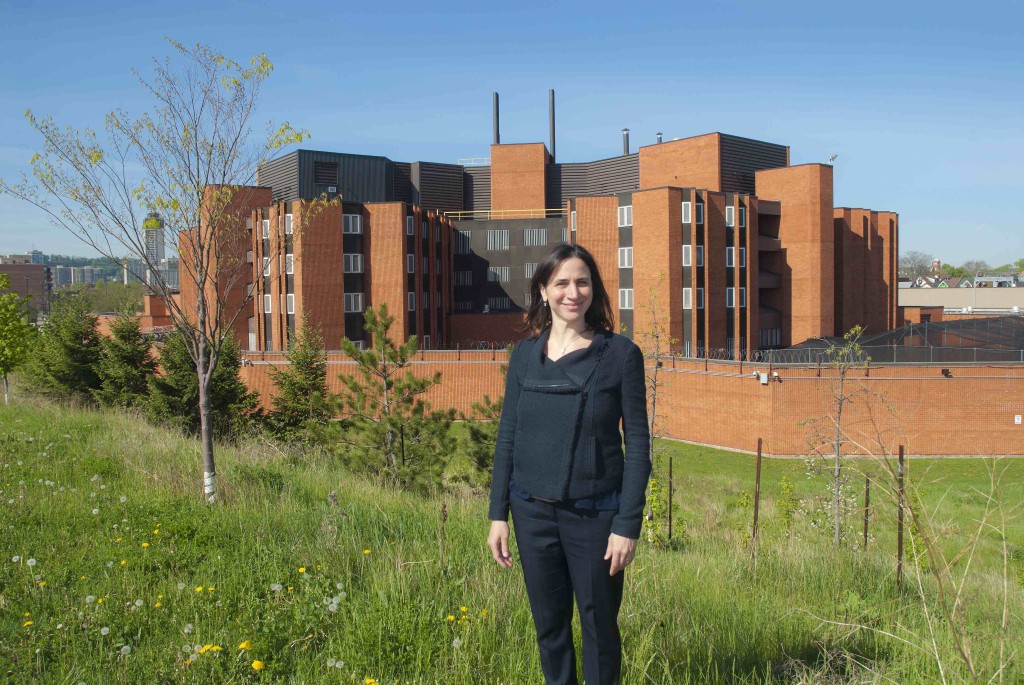 Dr. Fiona Kouyoumdjian, pictured outside of the Hamilton-Wentworth Detention Centre, believes Canadian prisons give doctors the opportunity to work with a population in our own country dealing with human rights concerns. (Photo by John Haney)

“A large proportion of our practice deals with the assessment and treatment of chronic conditions, such as musculoskeletal pathology, diabetes, heart conditions and chronic mental health problems like schizophrenia, bipolar disorder and personality disorders.”

Work in a Canadian prison is done at either the provincial or federal level — and there’s a key difference between the two that  pertains to the patient population. The federal system is responsible for administering sentences of two or more years for adult offenders, while the provincial systems handle offenders serving less than two years, those who are awaiting sentencing, young offenders and those who are deemed not criminally responsible.

Here are four points to contemplate if you’re considering lending your medical expertise to the prison system.

1. Be ready to stand your ground

In prison, you juxtapose your desire to practise good medicine with a setting that doesn’t see health or medicine as a priority, explained Dr. Ruth Martin, a 17-year veteran of prison clinics with BC Corrections. “Security is their priority,” she said. “So you’re constantly juggling your need to advocate for the patient with how the system functions.” For prison physicians, standing up for patients is just as important as standing ground against questionable patient demands. “There are a lot of patients who have personality and substance abuse disorders, so it’s necessary to be able to set your limits and say no if you think patients are asking for things that are not appropriate or reasonable,” said Dr. Fiona Kouyoumdjian, who works at the Hamilton-Wentworth Detention Centre, a provincial jail in Hamilton. “A classic example is people who want opioid medication for pain control.”

2. Have your clinical skills honed

Physicians in a prison setting must be comfortable with a minimum of frills, said Dr. Peg Robertson, who works at Warkworth Institution, a medium security facility in southeastern Ontario. For example, if a patient is having chest pains, the doctor can’t just call 911. I’d have to do whatever work I could in the institution, which might be putting in an I.V. and getting oxygen on, doing the vital signs and a physical examination and, at the same time, liaising with security,” she added.

In order to call 911, a prison doctor needs officers to secure the patient onto the stretcher when the paramedics arrive. They also need to accompany the prisoner to the hospital and stay with them while they receive treatment. “It’s a logistical puzzle to get it to work well,” Dr. Robertson said.

3. Consider your reasons for taking on prison work

Physicians are drawn to work in prisons for many different reasons. “People in jails and prisons face a lot of challenges in terms of their rights,” said Dr. Kouyoumdjian. “For people interested in issues like global health and human rights, like myself, it’s a population within our own country that is dealing with these concerns.” Other doctors believe that inmates just need someone to believe in them. “An inmate leaving my office in good health and saying: ‘Doc! You’ll never see me again, I am done with crime,’ reminds me of all the reasons why I chose this career,” added Dr. Lesage.

In Dr. Martin’s experience, prison medicine was an opportunity to practise meaningful medicine. “I found that the men and women were incredibly appreciative of the time and the care that I provided,” she said. “In that way, it was very rewarding because you worked with people who were genuinely wanting to make their lives better for themselves and get healthy.” She added that many of her patients viewed incarceration as an opportunity to see a physician or nurse and to address some of their health concerns. “Because often when (these prisoners) were out in the community they were homeless or they were on the run from police or involved in crime, so they were not actually addressing their health needs.”

In correctional facilities, the work can be either part time or full time. “But for people who are interested in part-time work or working in different kinds of practices, this is a great place,” said Dr. Kouyoumdjian. She supplements working one day a week at a prison with research on the health and health care of people in prisons at St. Michael’s Hospital in Toronto four days a week. Dr. Robertson works about 30 hours per week in the prison system. “And that’s a good thing,” she said of her nonfull-time hours. “It’s important to balance prison work with less otherworldly experiences. It’s a demanding, intense job. It’s really interesting, but it’s hard to imagine doing 40 to 45 hours of that a week, so people usually combine it with something else.”